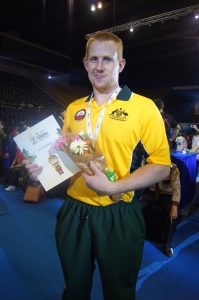 KWA is pleased to announce that John Bennet is the recipient of the 2015 Outstanding Male Athlete Award.

John started martial arts at the age of 15 and in 2011 he started training at Kumiai-Ryu Lithgow. He competed in sparring and grappling events at open style tournaments winning medals in many varied disciplines. He competed in Sanda Full Contact at the Kung-Fu Wushu Oceania’s in 2012 and received a silver medal and made it to the national team in 2015 where he represented Australia at the 2015 World Wushu Championships in Sanda and won a Bronze medal.

John said “For me martial arts has been one of the most positive experiences in my life and I can’t thank Coach Rob Williams and the guys at Kumiai Ryu and the KWA (Kung-Fu Wushu Australia) enough for all the help and support over the years. Representing Australia and being a part of the KWA team at the World Wushu Championships in Indonesia was the highlight, and something I will never forget. When I started martial arts I would have never expected to have had such opportunities or to have met so many great people. I always recommend martial arts training to anyone looking for a new sport or change in their life.”